Press Release from MD House of Delegates and MD State Senate. Please contact your MD legislators NOW and urge them to vote YES for both HB1312 and SB456. Go to http://mdelect.net/?vm=r&s=1 to determine who your elected officials are. 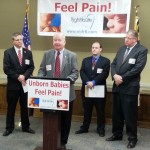 ANNAPOLIS—Del. Neil Parrott and Sen. Edward Reilly joined with family advocates and religious leaders on Wednesday in calling for passage of legislation that would protect unborn children in late pregnancy from pain.

“Doctors and Scientists have proven that unborn children 20 weeks and older feel pain,” said Del. Parrott. “Our state laws need to change in recognition of these findings and need to protect our littlest citizens.”

Robert Nelson, Minister of Pastoral Care at the 3,000-member Immanuel’s Church in Silver Spring, reflected, “Just last month in our county we saw the tragic consequences of the killing of a 33-week unborn child, which also led to the death of the 29-year-old mother. Both persons might still be alive if this legislation was in in effect”.

Maryland is a hub for out-of-state abortionists specializing in abortions late in pregnancy because it lacks protective laws for unborn children in the latest stages of pregnancy. Under existing Maryland law, abortions are legal up to the day of delivery. Some abortion facilities currently advertise abortions at five months and even later in pregnancy.

“Maryland should not continue to become a magnet for abortionists specializing in late abortions after substantial medical research indicates unborn children feel excruciating pain,” said Jeffrey Meister, legislation
director for Maryland Right to Life. “We’ve seen the heinous example of an abortion facility in Cecil County store 35 aborted children in a freezer—children as late as 35 weeks gestation. We’ve seen abortionists who
perform abortions after 20 weeks rejected by their home states and flee to Maryland because of Maryland’s lack of protective laws for the most vulnerable human beings. Enough is enough.”

The Pain-Capable Unborn Child Protection Act would require a physician who performs abortions to submit a report to european pharmacy the state detailing the gestational age of each unborn child and the method of abortion. The report
would not include the woman’s name, address or any other identifying information.

Del. Parrott’s HB l 312 is scheduled to be heard at 1 p.m. March 15 in the House Health and Government Operations Committee. The hearing on Sen. Reilly’s SB456 is set for 1 p.m. March 20 in the Senate Finance
Committee.