A Ribbon-cutting, an Opening, and a SAVE!!

“The people walking in darkness have seen a great light; on those viagra professional living in the land of deep darkness a light has dawned.” — Isaiah 9:2

The passage above was made manifest before the very eyes of over 50 volunteers, visitors and board members who gathered together Saturday morning, March 10, for the opening of the new Annapolis Pregnancy Clinic on West Street. Located just across the street from the ONLY abortion clinic remaining in Anne Arundel County, the homey, light-colored cottage stands in stark contrast to its polar opposite across the street. 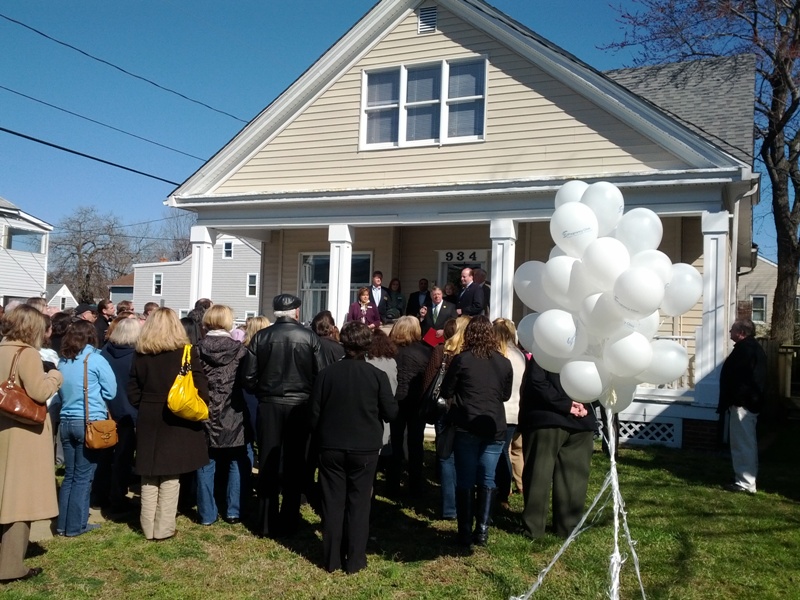 APC is as cozy as the Planned Parenthood building is cold, and as positive and life affirming as PP is death mongering. The new Clinic will offer women a wide variety of free per-natal services, including sonograms, pregnancy tests, and tests for STDs. Even better, they will offer hope to women who feel trapped into making a life and death decision when they are at their most vulnerable.

Among those who saw a great light Saturday were four “Clinic Escorts”, brought in from DC (because they couldn’t get anyone local) to stand outside during the festivities going on across the street. It should be noted that their stony, almost impassive faces provided yet another meaningful contrast to the joy being expressed by God’s people. They did, however, respond quite politely when Annapolis Clinic CEO Pamela Palumbo invited them in for coffee and cookies. Kudos to Pamela for offering a hot cup of coffee in Jesus’ name, and, let’s hope, giving the other side something to think about.

Miss the ceremony on Saturday? Watch the video recap on Vimeo!

Then, on Tuesday morning (March 13th), APC opened for business!! And what a first day it was!!!

In the morning a young woman with an appt. for an abortion at Planned Parenthood parked on the side street next to APC and stood looking at the sign & door. The APC Office Manager went out, asked if she could help. When the girl mentioned her scheduled appointment at PP, the APC Office Manager offered her a sonogram, which she accepted. By time she left, she decided NOT to go for her abortion!! Pray she stays strong and can work out some difficult family issues. 2 other young women were also seen on Tuesday. One needed help with her pregnancy and another was pregnant and considering abortion. Everyone at APC is SO thankful for EVERYONE who made it possible for this new Clinic to be there, along with the 3D/4D ultrasound to share this truth of LIFE!

The Lie – Pro-Life Youth Night at The Cave

Friday night, before the Annapolis Pregnancy Clinic ribbon cutting ceremony, MDCFL sponsored The Lie, a Pro-Life Youth Night at The Cave. It was a truly AMAZING night. MDCFL was joined by Kelly Stauffer, who shared her heart-wrenching personal testimony, Christcentric and Caitlin Jane – two up-and-coming musical artists. Check out http://video.MDCoalitionForLife.com to see all of the videos!

The MD March for Life was held on Monday evening. The March and the speakers were great. Stay tuned for a video from the March!